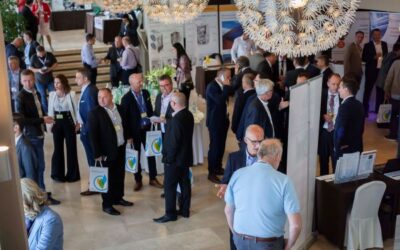 The 37th International Scientific and Expert Meeting of Gas Professionals, along with an international exhibition of gas equipment and technology, was successfully held in the Congress Center of the Grand Hotel Adriatic in Opatija on 11–13 May 2022 and organised jointly by the Croatian Gas Centre Ltd and the Croatian Gas Association (CGA) as a member of the International Gas Union (IGU).

Over the three days in Opatija, more than 500 attendees met from 21 European countries, including the USA. The event was attended by gas and energy professionals, managers from leading European energy companies, scientists from renowned Croatian and European universities, representatives from the natural gas transmission industry, gas suppliers, producers and distributors, including representatives from large industrial gas consumers, manufacturers and representatives of gas equipment from Croatia and abroad. In all, 44 scientific and expert papers, 11 technical-commercial presentations and 4 interesting panel discussions were organised. More than 190 various gas and energy companies and organisations were represented, with 37 exhibitors presenting their products and services in the exhibition area. In collaboration with the liquefied natural gas terminal operator – the company LNG Croatia LLC, the organisers scheduled a visit to the LNG terminal in Omišalj on the island of Krk for interested attendees.

At the opening of the gathering, the President of the Croatian Gas Association (CGA), Assist Prof Dalibor Pudić, PhD pointed out that since the last gathering in Opatija, there had been many changes in the European and global energy market, such as enormous price increases, uncertainty concerning security and reliability of supply, as a reflexive action to the Ukrainian crisis. He noted that the CGA supports the path towards decarbonisation of natural gas, which in combination with other gases producing fewer emissions, will have a very important role in the transition period and that hydrogen will be an increasingly important topic in the future.

Ivo Milatić, the state secretary of the Ministry of Economy and Sustainable Development, highlighted the Croatian Government’s policy of providing maximum support for all investments in developing the gas infrastructure and considers the decision to construct the LNG terminal as wise, because the current complex situation offers security as is only possible in a small number of countries in the EU. He also announced that capacities at the LNG terminal on the island of Krk will increase to 6.1 billion cubic metres, and gas production from proprietary sources will increase to 800 million cubic metres next year. Emphasis was also placed on Croatia’s endeavours aimed at applying for the Connecting Europe Facility (CEF) (Instrument for connecting for the purpose of constructing the Ionian-Adriatic Pipeline (IAP) on the section from Dugopolje through Montenegro to Albania. At the end of the presentation, the state secretary estimated that in terms of protecting households against gas prices, Croatia is among the leading European countries doing so and also noted that gas reductions for citizens over the coming winter will not happen.

Andrea Stegher, vice president and the elected future president of the International Gas Union (IGU), pointed out that the commenced decarbonisation of energy until 2050 offers gas a chance to have an important role in the energy transition. Particular significance will be given to environmental protection and seeking new solutions for energy sources that emit the least possible greenhouse gas emissions. In referring to the current energy crisis and securing gas supplies to European countries for the coming heating season, he noted the importance of filling the capacities of gas storage facilities. Regarding LNG, there is currently no supply problem in Europe which is mainly attributed to issues associated with the pandemic currently affecting the largest Chinese cities and reduced demand. He also drew attention to possible difficulties in LNG supplies from the USA because export growth also causes price increases on the American market, where gas continues to be cheaper than in Europe, hence the possibility of restricted exports.

The 38th International Scientific and Expert Meeting of Gas Professionals will be held in May 2023 in Opatija.