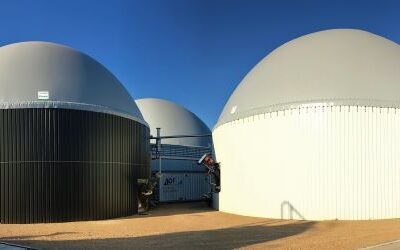 Enagás has signed an agreement with the companies Infraestructura Biometagás and Biometagás La Galera to connect the industrial production plant owned by Biometagás La Galera in the municipality of La Galera (Tarragona) to the pipelines network. It is the first private initiative of its kind in Spain, aimed at promoting the injection of biomethane into the gas transmission network.

Currently, in Spain, biomethane is only injected into the gas transmission network from the biomethanation plant at the Valdemingómez Technology Park, as a result of a public initiative.

Under the terms of the agreement, the Biometagás La Galera plant will produce biomethane from the management of biodegradable organic waste. Infraestructura Biometagás will own the gas pipeline that will connect the biomethane plant to the Enagás’ Basic Gas Pipeline Network.

At its maximum production capacity, the plant will generate and inject an output of 50 GWh/year into the gas network, which is equivalent to the average annual natural gas consumption of 6,300 homes.

Biomethane will be produced from approximately 150 tonnes of organic waste from agricultural and livestock activities and the agri-food industry every day, which is highly efficient compared to other energy crops with a lower yield. Through a process called “upgrading”, biomethane is separated from other biogas components, which enriches the final calorific content. AGF Ingeniería de Procesos, a company specialised in renewable gases, will provide the technology required for the production of biogas and for the upgrading process.

Enagás has launched the Green Link initiative to facilitate this type of connection to the high-pressure pipeline network for the production of biomethane and other renewable gases. This project is an efficient and modular technological solution that contributes to decarbonisation, by promoting renewable gases such as biomethane, and encouraging the development of circular economy, thanks to the recovery of organic waste. It is also a driving force for employment and local development.

Along with this agreement, which sets the implementation of this biomethane injection point in 2021, there have been new requests for connection to the network. Thanks to the Green Link project, Enagás’ pipeline network has the capacity and is technically prepared to take on an eventual exponential growth in connection requests.